Welcome to the Planetisuzoo Forums!

Been lurking for a few days while I researched/prepared to purchase an Amigo which I'll be picking up from Phoenix this weekend!
It's an 1989 Isuzu Amigo Sport -- 124k miles / 5 speed 2.6L / no AC / hard top / comes w/ original snowflake wheels / 4" lift / Has spent entire life in Nevada and Phoenix / almost entirely stock.

The owner is a huge Isuzu fan - has owned Amigos/Rodeos/Troopers. Has even imported from Japan. He clearly knows them inside and out and I couldnt think of a better person to be buying a 32 year old car from. In fact, he looked for one like this for a year. He's only selling because he's moving to Florida and can't stand the thought of it rusting out in the humidity. I will be the third owner. He only had it for about 4 months before being relocated to Florida for work.

Just look at this beauty Really just getting it for a fun weekend car for trips to the beach, hardware store runs, take the dog to the park, etc. My 5 year old son is super fired up about Dad's new monster truck. Althought, he's a little bummed I didn't get the other one I found with a Zebra stripe paint job. (To be fair, it was actually very well done)

My first car was my dad's 1990 Isuzu Trooper - 2.6 Manual 4X4. It was a tin can with no AC but I have a lot of great memories from it. I put it through hell for a couple years when I was cleaning pools. Spoiler alert: chlorine and acid will wreak havok on a Trooper interior

Growing up, we also had a mid 90's Isuzu Rodeo. Manual 2WD. Such a solid car. But boy, what a tricky little clutch.

Bonus pic of the old Trooper RIP on an incredibly ill-prepared (but survived) offroading trip in Joshua Tree. 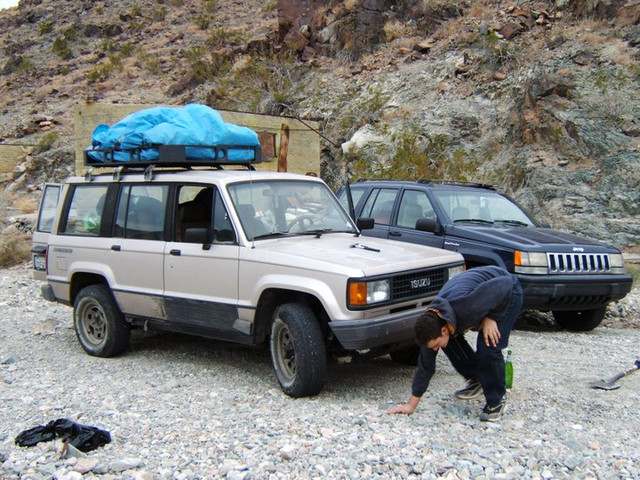 I'm an extreme novice when it comes to cars (Only things I've ever done are: change oil, change a tire, change stereo, replace a power window motor) but I think this will be a good little machine to start dabbling with.

My initial plans for the Amigo:
- replace the sensor that tells you how full gas tank is (owner said its gonna give out soon)
- get a carpet kit for heat protection/sound dampening (has a bare metal interior)
- wheel cover for spare which I'll adorn with an AMIGO graphic (deciding between period correct or a custom version of the OG AMIGO font/logo)
- I love the hard top but being in Los Angeles, I'd imagine the soft top would be a little more practical. Should I be looking for an old one (I read here and other places they were pretty bad) or should I pursue an aftermarket solution?
- it doesn't have the little roll bar/support columns in the rear that I've seen on some other early models. Might need track some down or get a custom set installed. I know its never going to be the SAFEST car, but those would ease my mind a bit about the rear passengers

Down the road plans:
- maybe swap seats with some later model Rodeo seats? these dont have any tears and look to be in good condition but if they're like my old Trooper's seats, they aren't super comfy
- the seller suggested I find a center console/arm rest from a Gen 2 Amigo. He's pretty sure it will bolt right in. Can anyone confirm?

Appreciate all the help so many of you have given me via old posts and appreciate any feedback on this post or future ones. Excited to be back in the Isuzu family!
Tentin

That thing is rad! What size are the tires?
tylerruinstrucks

Tentin wrote:That thing is rad! What size are the tires?

Rad is definitely the word that comes to mind every time I look at it! They are 33" tires on 15" wheels.
szac

Congrats! I'm in Phoenix and have been watching your Amigo on CL! Looking forward to seeing more of it here. I have a 1990 physical FSM that covers both my Pickup(also an '89) and your Amigo - let me know if you want me to post anything. I haven't noticed any differences yet between the model years.

Just in case you haven't seen this Amigo refresh on YT: https://www.youtube.com/watch?v=bsDZ9I9eqyU

vin-decode.jpg
You do not have the required permissions to view the files attached to this post.
tylerruinstrucks

Hey thank you! I feel very lucky to have ended up finding it and nabbing it considering it's been for sale for a month. Especially because I started this search on a whim Monday night -- and by Tuesday afternoon I had a car! Then again, I suppose it's a pretty niche vehicle so that was probably in my favor.

Really appreciate the offer for sharing stuff from the service manual. I'm sure I'll need some info/help sooner rather than later!

I also just watched that rebuild yesterday. For a car with so little info online, it's an amazing stroke of luck to have a long, informative video that features good work, clearly presented and wonderful video editing. A real diamond in the rough.

I'm thinking one of the first things I need to track down is a roll bar (either stock from the later Gen 1 models) or maybe have one fabricated? I figure once I pop the top, it would be a tad safer to have something back there to protect rear passengers in case of a bad accident. Plus I'd be able to add the shoulder belts which would make securing my son's car seat much easier.

Would love to hear other suggestions you and other here might have!
tylerruinstrucks