Welcome to the Planetisuzoo Forums!

Rebuild looks very well along and fastidiously/meticulously done! See you're using the "Jerrycam" and wonder if you anticipate any problems getting your stead re-certified for California's stringent smog requirements? Any suggestions?

Thanks! I posed this question to Jerry back when I ordered it and here was his response:

JLEMOND wrote:IF EVERY THING ELSE EMMISSIONS WISE IS O N THE ENG AND WORKING IT SHOULD PASS , I HAVE SOLD THEM ALLOVER THE COUNTRY AND SOME IN CALIF , BUT NOT SURE IF THE CAL CUSTIMERS WERE IN A TESTING AREA,.

So, guess we'll just have to wait for your trial with the CALIF smog testing folks! Perhaps someone else in CA. can offer their smog testing experience with this cam on a recently rebuilt 4ZE4. I agree with Jerry that "IT SHOULD PASS", but emission testing in CA. can be trying. Hope you have the best of luck, emission wise. Please keep us apprised.

My Walbro pump came in the other day, so I decided to tackle installing that, replacing the incorrect pump I had purchased earlier.

I didn't want to use the hanger from my current pump since the unit is basically brand new, so I got another hanger from the junkyard. If anyone is in the market for a barely used Bosch fuel pump for V6 and/or an OK condition fuel tank, let me know!

I ordered product number #8083-GCA314 from walbrofuelpumps.com. I've read some people have had issues fitting these to their hangers but this kit was pretty straightforward. I cleaned up the old frame, riveted on a new nitrile rubber flap, and installed the pump. The little rubber isolator piece between the pump and bottom of the hanger was a perfect fit. I soldered the new wiring as opposed to using the crimps because when I stripped the old wires, the copper was pretty patina-y and soldering would just take a few minutes more.

IMG_2239.jpg
You do not have the required permissions to view the files attached to this post.
giusedtobe

Hey I like the shiny silver exhaust manifold paint! Did you use new bolts instead of the standard studs that go in the head?

Top work so far. My block & crank is at the machine shop. I am trying to decide whether to paint the block black like you did or do something nuts like the lime green I saw someone else did.

Whoa guys. So I haven't posted any updates in about six months. Did anything interesting happen in the meantime?

After about a year and half of slowly plugging away at this project, and doing all of the "well I might as well do this too" things, I've finally got a running Trooper!

Putting the engine in was pretty straight forward. I dropped in the lower block first, then the completely assembled head as one unit. I made sure to put the dowel bolts in the right spots when joining the block to the bellhousing. Replaced just about every single piece of rubber that exists in the engine bay, including the quarter-mile of vacuum lines.

This Trooper build was and remains a great inspiration to me on how I want my truck to look and perform. That archived link thankfully has all the pictures that don't seem to exist on old car forums anymore.

giusedtobe wrote:Hey I like the shiny silver exhaust manifold paint! Did you use new bolts instead of the standard studs that go in the head?

Top work so far. My block & crank is at the machine shop. I am trying to decide whether to paint the block black like you did or do something nuts like the lime green I saw someone else did.

I used to the standard studs. I originally got some copper plated nuts to put on there, but they were too long, or my studs were too short. Either way I got some stainless serrated nuts that had a thinner profile on there now.


Now for some pics: 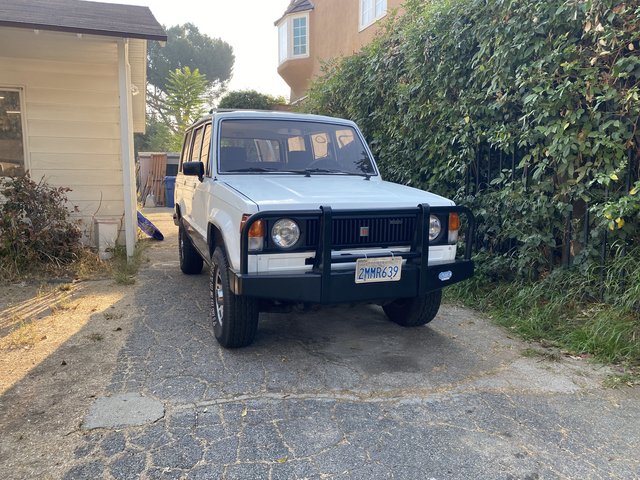 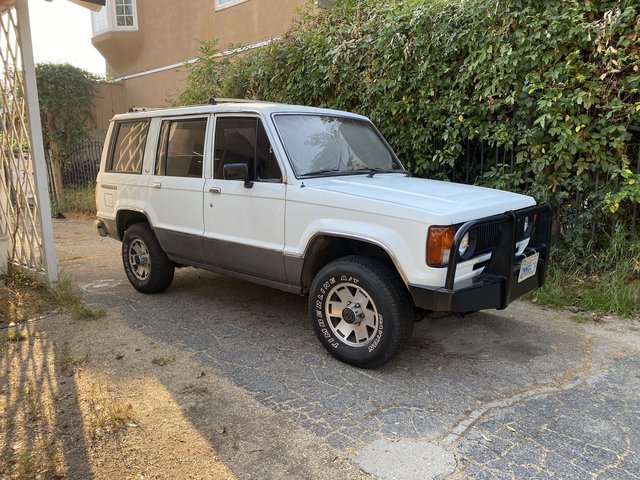 I also never mentioned that I have a cargo cover! I didn't think much of it when I first got the truck, but have learned just how rare they are. (Mandatory RockAuto box also pictured) 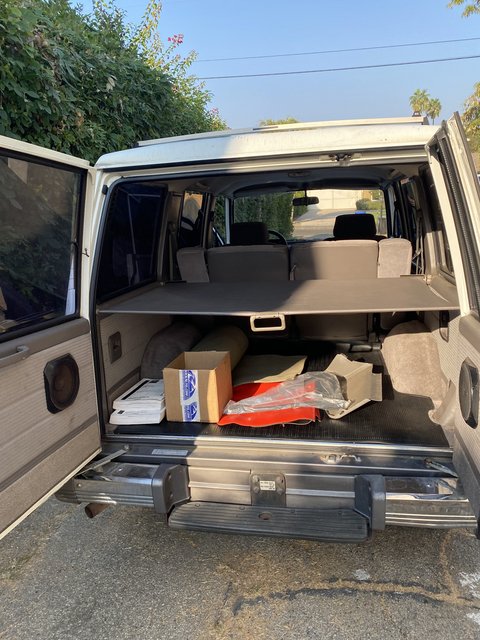 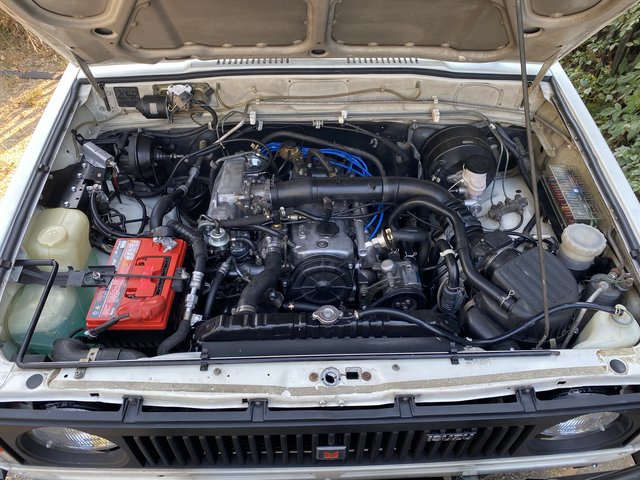 After installing the engine and driving it around the block a few times, my Trooper got it's first oil leak! I was such a proud Dad. But seriously, I was super frustrated that some bead of RTV I laid a year ago was probably not sufficient somewhere around the oil pan. I decided not to mess around. I immediately ordered a fluorescent dye and UV flashlight on Amazon which REALLY works. The leak was emanating from front crankshaft seal retainer plate. I was able to remove the plate without removing the oil pan or engine (thank goodness). Jerry recommended putting a bead of RTV in the groove that the half circle seal sits in, which I had not done before. I got it all buttoned up and no more leaks...for now.

Also, I decided to check the torque on the head bolts after only maybe 10 or 20 miles of test drives, and was surprised that several bolts went a good 1/8 turn to reach the correct torque again. I've read some debate on when the head bolts should be retorqued, so there's another data point for you.

One big unknown with this truck was the transmission, since I bought it non-op and had it towed to my house. I'm happy to report that Aisin Warner auto trans shifts smooth as silk. Very impressive for such an old tranny. I had always imagined that my Trooper would be a manual, and failing that I could convert an auto to a manual, but I'm pretty happy with the current configuration and think I'll let that idea go.

It's idling nicely at 900 rpm. Just got insurance setup and now off to get it smogged and registered, and throw on some new tires.

Huge shoutout to Jerry, obviously. Also Dennis, Ed, and anyone who has ever posted here on the Planet. Such an invaluable resource for Isuzu owners.
hessmess

Very happy to hear of your success! That Aisain trans should give you good service. Beautiful Trooper!
shaggydoink

takemehome4LOroads wrote:After about a year and half of slowly plugging away at this project, and doing all of the "well I might as well do this too" things, I've finally got a running Trooper!

Very cool to read this, enjoy!!

p.s: would you mind sharing which leak detection kit you got?
takemehome4LOroads

I got this UV dye and paired it with this UV flashlight.

Oddly, I couldn't find a kit that has both of them together, on Amazon at least. Now that I've done the leak test I can use the UV flashlight to go scorpion hunting.

Oh, and make sure you take a second to shine the light on your car before you add the dye. Somethings will glow that you weren't expecting and you'll want to know that before hand. For example, my A/C compressor was lighting up so I thought my oil leak may have been starting from the valve cover and working it's way down. I realized later that the oil in the A/C system also has a UV dye in it. Wish I checked that ahead of time.
shaggydoink

The "Thanks" button seems to have disappeared again, so... thanks!!

Welp, the Trooper just barely failed smog due to high NOx at 25mph. So now I'm going through the EGR system to make sure that is all working as it should.

EGR is opening about 2mm when I open the throttle. Pushing the EGR open causes the idle to stumble and if I open it all the way the engine dies. I'm only seeing a maximum of about 2 inHg of vacuum when I tee off the vacuum line between the EGR and BPT. I verified that about 20 inHG of signal vacuum is reaching the BPT when the engine is warm and the blue TVV and throttle are open. The vacuum amount changes depending how open the throttle valve is, as it should.

A couple things I haven't been able to find after a lot of searching here is exactly how much should the EGR be opening and/or how much vacuum should it be receiving and when. I've taken off the EGR pipe just to double check it. It has no obstructions. When I was checking the EGR port on the exhaust manifold I saw an obstruction which I'm not sure is carbon build-up or a duct of some kind. Anyone know off the top of their head if this is normal? See pic: 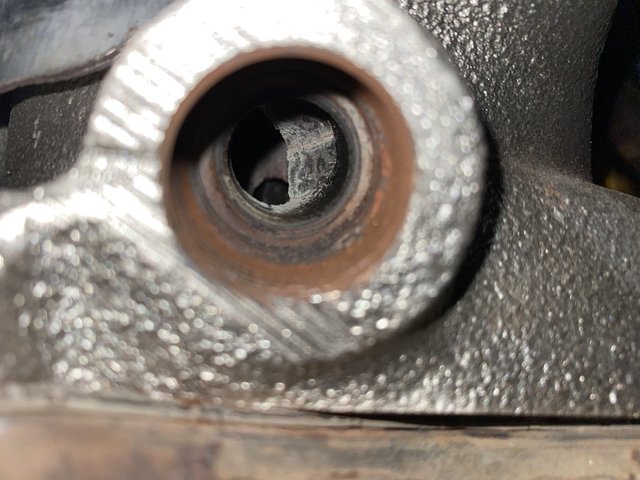 I also sprayed in some seafoam before I took everything apart and all the smoke it created indicated an exhaust leak where the manifold meets the down pipe. Not sure if that's enough to cause a fail. I also checked the catalytic converter with my IR temp gun. incoming pipe was 390F, outgoing was 480F which should indicate a healthy cat. I think the cat only has about 17k miles on it.

Also I inflated the tires to 35 PSI. They are super old and I was worried about blowing them out until I can get new ones.
Ed Mc.

That looks like carbon buildup to me. Have you tried to attack it with a small screwdriver or other suitable scraping tool? I bet it crumbles away.

Since you're borderline-fail, anything that blocks the normal amount of recirculated exhaust gasses might throw the emissions test off.

So I totally forgot I have an endoscope. What a good time to have one.

Here's a close-up in through the EGR port: 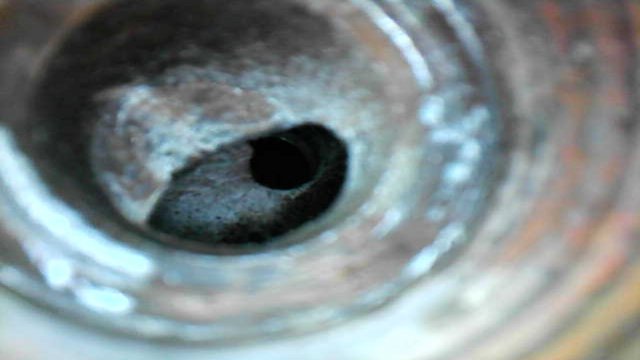 And here's a view from the O2 sensor port: 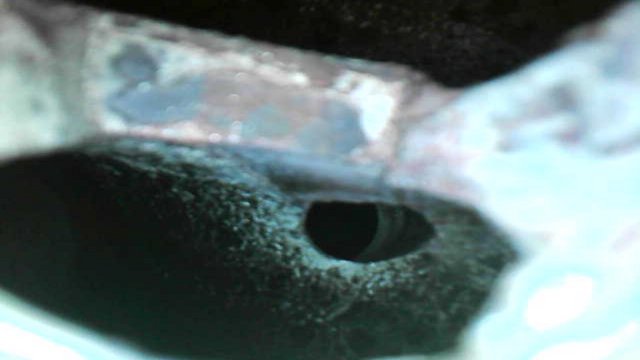 Looks like that's just part of the manifold. Hitting it with a screwdriver, it feels pretty solid.
Post a reply
Switch to full site